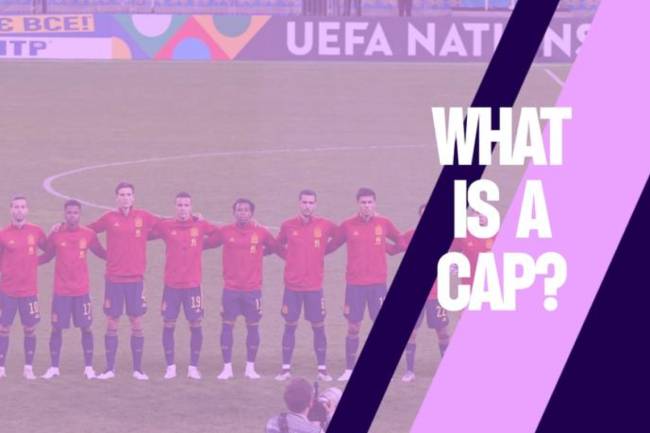 The game of soccer (football) is rich in traditions, filled with history, and full of pride. A soccer cap is a great way to showcase the best players. Soccer caps, or international caps, are tally marks of how many international games a player played.

What are the qualifications for earning a cap, and why is it called a cap? Is there a physical hat for you to wear during games, and how do you achieve this recognition? The following is a complete breakdown of what a soccer cap is.

A Brief History of the Cap in Soccer

The cap dates back to an international soccer match between Scotland and England in 1872. The Scottish players wore cowls, and the English wore caps to indicate which side they were on. England began awarding white caps with roses to their players during international play to make them stand out.

Currently, international players do not receive a cap. A number is added to their career stats page to indicate how many international games they played. It is possible, however, that some milestones will be recognized with a special award, such as the 100th cap.

What Games can a Soccer Player Earn a Cap?

How Does a Soccer Player Earn an International Cap?

In an international match, a soccer player earns a cap when they appear during the game. When you make an appearance for your national team (England) against (Scotland), you get a cap.

Can Players Who Enter the Game as a Substitute Earn a Cap?

During an international soccer game, a player who is substituted off the bench receives a cap. It doesn’t matter if they don’t even touch the soccer ball. As long as they are on the field during the match, they get a cap.

Why are Caps Important?

Cricket still awards physical caps during games outside of soccer. On the biggest stage, cricket players are also recognized like their soccer counterparts.

Can Players Earn Caps for Different Teams over their Career?

International players can receive caps for different teams in soccer. After the rule change in 2020, players will be able to move to different international teams and earn caps from numerous organizations. Sports Illustrated and Section 5.2 of the Federation of Football Associations have more information on the rule changes.

Do Players Get an Actual Cap in Soccer?

Physical caps are no longer given to soccer players unless they reach a certain milestone. Some players will receive a commemorative cap when they reach 50 or 100 caps, but there is no physical cap any longer. Physical caps were used in the 1800s to distinguish players.

Can Soccer Players Wear a Hat During a Game?

As long as the hat meets the Laws of the Game criteria, it can be worn by a soccer player. In order for the headgear to qualify, the referee must confirm that it won’t endanger anyone on the pitch. Headgear can be worn during a soccer match as long as it has been approved by the referee before the game.

Typically, goalkeepers wear hats to protect themselves from potential injuries. He wore protective headgear after suffering a head injury during a match during his career as a goaltender.

What Does First Cap Mean in Soccer?

Who Has the Most Caps for Men’s Soccer?

Who Has the Most Caps for Women’s Soccer?

As of January 2022, Kristine Lilly holds the record for the most caps for soccer with 354 caps. Second place goes to Carli Lloyd at 316, and third place goes to Christie Pearce at 311. Some of the names on the list are still playing women’s soccer today, so take a look at the complete list of cap leaders.

Conclusion: What is a Cap in Soccer?

A cap in soccer represents how many times a player has appeared during an international match. Over the years, what began as a way to separate Scotland and England players in 1872 has become something much more significant. For any player on the world stage, getting a cap is a significant achievement.