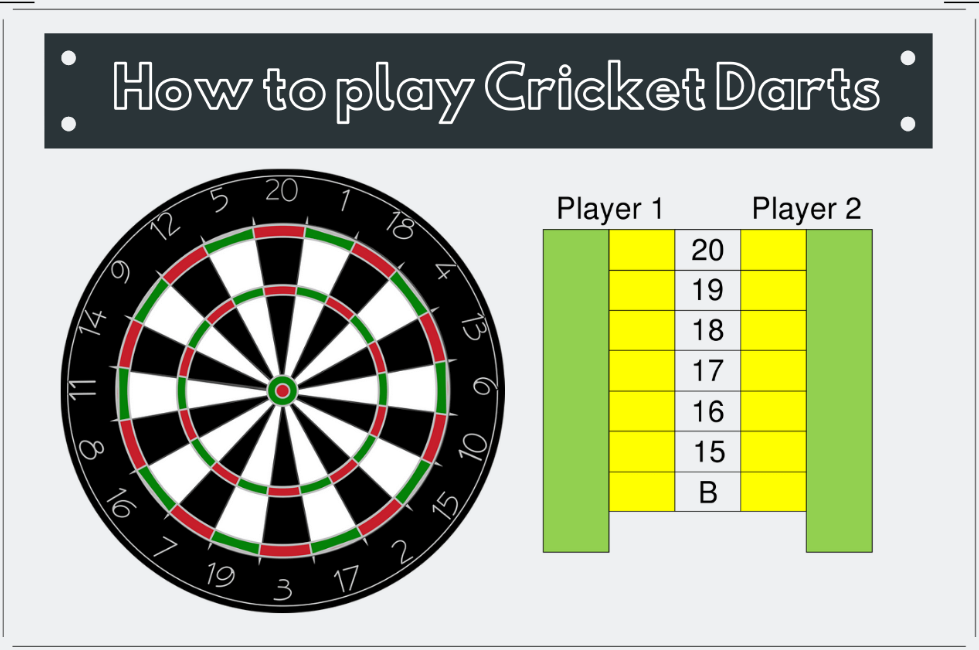 How to play cricket darts? A bar-going adult should know how to play cricket. The vast majority of people who stand in front of the dart board choose 301, which is a simple game in which each player takes turns until someone scores 301 points, but cricket is superior. Here’s how to play.

The object of the game:

Once the numbers 15 through 20 and the bullseye have been “closed out,” the objective of Cricket is to score more points than the other team.

Rules of the game:

In this game, players throw three darts at the board while trying to hit 15 through 20 and the bullseye. Any other number does not matter. In cricket, players must “close out” their numbers, which means they must score 15 through 20 and the bullseye three times before they can win. If you hit the outer ring of a number, it counts as two, and if you hit the inner ring, it counts as three (unless you aim for the bullseye, in which case the outer ring counts for one and the inner circle counts for two).

If you hit the inner ring of 15, for example, you close it out for your team. In the event a player closes out a number before the other does, that player can rack up points every time they hit that number until the other player does. As soon as both teams have closed out a number, it is no longer in play, and neither team can score points on it. As soon as one team closes out their board with a greater or equal score, they win.

Set up the scoreboard with three sections, two for each team and one in the middle for the numbers 15 through 20 and the bullseye:

When a team scores a number three times, that number is closed (shown by a mark of an “X” with a circle around it). If the other team has yet to close that number, the first team can start scoring points on it by hitting it again. The number of points you receive correlates with whatever number you are hitting. If you hit a 17, you get 17 points, a 20, 20 points, and so on. When it comes to scoring on the bullseye, the outer ring counts for 25 points, the inner counts for 50. Below shows an example of a team that has closed out 15 and hit it a fourth time before the other team had a chance to close it out:

The game ends when the team with all the closed-out numbers has more points than their opponent. A completed game might look something like this:

What are the rules for cricket darts?

Players take turns throwing three darts at the board, trying to hit 15 through 20 and the bullseye. If you hit any other number, nothing happens. Cricket requires each person to “close out” numbers, meaning players have to score each number (15 through 20) and the bullseye three times before the game can end.

How do you play English cricket darts?

Cricket is the most popular English Dart game there is. The object is to hit the numbers from 15-20 and the bulls-eye three times, each, which in return “closes” that number out. Once you have closed a number out and your opponent has not, you can now score on that number by hitting it again.

What are Hammer cricket darts?

Hammer Cricket is a count-up game using a different cricket number each round. There are two wild rounds displaying a random number between 12-20 or the Bull. The first dart scored in each round counts for a segment.

Who wins in cricket darts?

A player scores points by hitting the area he/she has opened. By getting three marks on a number, you can void your opponent’s open area. The player with the highest score when all numbers are closed or at the round limit, wins.